Fifty six supporters and members of staff from Barnsley FC, including Barnsley CEO, Ben Mansford successfully completed the 24 mile walk from Oakwell to Bradford City prior to the game last saturday.  The walk was organised jointly by the Barnsley Football Club Supporters’ Trust and the West Stand Bogs Fanzine win memory of the 56 football fans who tragically never made it home on 11 May 1985.

The walk  was a huge success and has to date almost £7,500 for the two charities, the Plastic Surgery and Burns Research Unit at Bradford and local Barnsley charity Jaxon’s Gift. Jaxon’s Gift supports families in the region impacted by the death of a young child.  The walkers were amazed with the reception and support they received along the route, and all found it a very moving and rewarding experience.

We would like to thank all the walkers, everyone who has donated so far and the back up team for your support of this event.  The walk has put the PRIDE back into Barnsley, shown the people of Yorkshire and the wider football community that supporters can come together and do great things within their community.

You can still donate to the charities using the link

BFCST have had a long affiliation with Bradford City Football Club, both on and off the pitch, working in the past to organise a commemorative game between the clubs to celebrate Barnsley’s promotion to the Premier League. Paul Gallagher, Chairman of BFCST, commented ‘The Bradford City Fire will always go down as one of the saddest days in football history. Nobody should fail to make it home from a football match, and we’re honoured that ourselves the fanzine and both football clubs worked together to make a difference for this anniversary.

West Stand Bogs is a relatively new, non profit making, fanzine only 18 months old, but thriving issue after issue and soaring in popularity with fans. Liam Dyson, co-founder of the fanzine, said ‘After organising a similar walk to Chesterfield earlier in the season and raising £8,500 for the Barnsley Churches Drop In charity, we’re delighted to work with the Supporters’ Trust on this charity walk to not only support the Plastic Surgery and Burns Research Unit, but Jaxon’s Gift as well, a local charity, chosen by our readers as the charity they would like us to get behind. 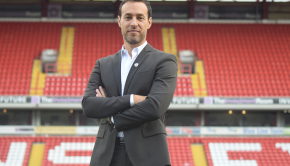