The next meeting of the FOOTBALL SUPPORTERS’ FEDERATION. YORKSHIRE DIVISION will be on Meeting at Sunday 22nd March 2015 At the Sparrow Bier Cafe 32 North Parade, Bradford BD1 3HZ.

The venue is a Short walk from Forster Square Railway Station

A buffet will be provided from 12.30pm and the meeting will start at 1.00pm

4, Following the discussion we will try to set up a campaign strategy group to take these issues forward in Yorkshire

Say No To Super League → 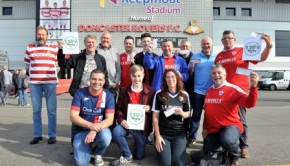